An article in the Global Politician describes Sadegh Sistani as a “political prisoner who escaped Iranian dungeons in April 2011 and has endured 17 years and 8 months of torture and interrogation by the Iranian Intelligence service.” 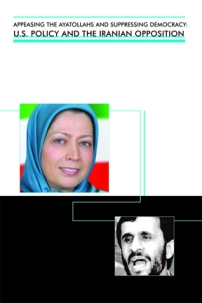 Appeasing the Ayatollahs and Suppressing Democracy: U.S. Policy and the Iranian Opposition, IPC

The Sistani article makes an interesting case for the U.S. State Department to refrain from appeasing the Iranian regime by placing its main political opposition that rejects clerical rule on the Department’s Foreign Terrorist Organizations list. In this respect, Sistani reinforces the argument made in an IPC book, Appeasing the Ayatollahs and Suppressing Democracy. One reviewer states that the book provides:

“an excellent discussion of how the past policies of appeasement and engagement with the Iranian regime have only made it more aggressive. The book provides many examples, especially for the Khatami (the “moderate” president) era and the U.S. administration’s attempts to appease the mullahs, hoping for reforms and moderation inside Iran.”

“The result was exactly the opposite. The Iranian mullahs internal repression was extended (as evident from the brutal repression of the student movements), many authors were assassinated during serial killings, substantially more women were stoned to death, Iran’s nuclear program accelerated, and guess who, after the “moderation” era, became Iran’s “president” — yes, Khatami paved the road for Ahmadinejad. The fact is: both Khatami and Ahmadinejad bow to Khamenei. Khamenei rules. There is no room for moderation.

“The only viable solution for a free, democratic Iran is to stop appeasing the mullahs, and to support the Iranian people and their resistance. The book provides a compelling argument why the Mojahedin [Mujahedeen-e Khalq (MEK)] cannot be ignored and the role they will inevitably have to play in the future of Iran.”

The Sistani article also discusses the siege of MEK residents by Iraqi Security Forces in Camp Ashraf as the residents await transfer to Camp Liberty and an opportunity for resettlement outside of Iraq. in this respect, the article supports the argument that the international community has a “responsibility to protect” unarmed civilians subject to harm put forth in an IPC post,

CLICK HERE FOR ORIGINAL ARTICLE IN THE NATIONAL INTEREST.

According to the secretary general, the doctrine “requires the international community to step in if this obligation is not met.” Washington is now stepping up to the plate with its offer to protect the Iranian dissidents in Iraq.

But others have shirked their roles in monitoring the situation. The International Committee of the Red Cross (ICRC) acknowledged it has not visited the Iranian oppositionists as of the end of 2011 because “the situation . . . is being monitored by the United Nations Assistance Mission for Iraq [UNAMI].”

Yet monitoring by UNAMI has not restrained Iraqi military and police forces. They violated a signed December 2011 memorandum of understanding between the UN and Government of Iraq by mistreating Iranian dissidents during their transfer from Camp Ashraf to Camp Hurriya, formerly Camp Liberty, Iraq.

Since the publication of the “responsibility to protect” article, the situations in Ashraf and in Camp Liberty have deteriorated even further.

Struan Stevenson, Member of the European Parliament and President of the Parliament’s Delegation for Relations with Iraq stated that an assault on Camp Ashraf had occurred on 27 August 2012,

“…causing injury to 20 residents, [and] once again reveals the ominous intentions of the Iranian regime and its collaborators in Iraq. According to pictures and video clips, Iraqi SWAT forces (wearing all-black uniforms) attacked the defenceless residents, who had gathered with their personal belongings to be inspected before moving to Camp Liberty at the specific request of the US and UN.”

For additional IPC commentary on the situation in Camp Liberty at the end of August 2012, see:

Terror Tagging of an Iranian Dissident Organization by Raymond Tanter

The press release below summarizes in multimedia format a conference in Washington DC on 25 August 2012 of high level former American officials. Each hyperlink on the press release contains a presentation of a particular speaker.

An overall theme of the conference is linkage between designation of the Mujahedeen-e-Khalq (MEK) on the U.S. foreign terrorist organizations list and difficulty in resettling residents who are members of the MEK and who reside in Camp Ashraf and Camp Liberty, Iraq to third countries.

In the context of removal of the MEK from the U.S. terrorist list, Iran Policy Committee (IPC) research reported in Terror Tagging of an Iranian Dissident Organization, indicates an increased likelihood that third countries will accept the residents.

Meanwhile, two days after the August conference in Washington, members of the MEK in Camp Ashraf submitted to a search by Iraqi forces as condition for the MEK to travel to Camp Liberty en route to possible resettlement outside of Iraq.

During the search, there is evidence that an Iraqi army intelligence officer with a prominent role in the July 2009 and April 2011 Iraqi attacks against Ashraf residents began threatening them. When police and soldiers began pushing the residents, they protested, which resulted in rock throwing by the Iraqis. See photo below of Iraqi policemen throwing rocks at the residents of Ashraf.

27 August 2012, Iraqi soldiers attacking Camp Ashraf residents as they stand in line to be transported to Camp Liberty in 100 degree weather

WASHINGTON, Aug. 28, 2012 /PRNewswire-USNewswire/ — In a symposium at the historic Willard Intercontinental Hotel on Saturday [August 25, 2012, former senior U.S. officials urged the State Department to delist the main Iranian opposition group, the Mujahedin-e Khalq (MeK), and protect its members in Camps Ashraf and Liberty in Iraq.

In his opening remarks, former Congressman Patrick Kennedy  made a reference to the 6th group of 400 of the residents of Camp Ashraf who were preparing to go to Camp Liberty from Ashraf: “As the sixth convoy leaves and because of the leadership and goodwill gesture of Madam Rajavi, it’s appropriate that we call on the Iraqi government, that we call on the United Nations and Mr. Kobler to finally do the right thing and …to honor the humanitarian issues that have been pointed out in the Memorandum of Understanding.”

General James Jones, President Obama’s former National Security Advisor and former Commander, Supreme Allied Command-Europe, who could not attend the conference, said in a written message, “The right thing to do, the humanitarian thing to do, is for the United States to remove the terrorist listing currently ascribed to the people of Camp Ashraf and Camp Liberty, and to champion a program of third country repatriation as soon as possible.”

Former Attorney General Michael Mukasey described Secretary Clinton’s linkage of cooperation in the closure of Ashraf and the de-listing of the MeK as being “completely lawless, because it’s got nothing to do with standards under the statute.” He added, “The continued listing of MeK is the main obstacle to resettlement and the MeK has done all in its power to comply with even the irrelevant demand that Ashraf be closed.  Enough is enough.” Judges Mukasey concluded that the residents of Camp Ashraf “have already put their lives on the line yet again by trying to organize yet another convey and have been frustrated in that effort; it is not time to urge further accommodation by the residents, it is time to urge common sense on the State Department.”

Former CIA Director Porter Goss added, “My job is to find terrorists…We looked at Camp Ashraf but we didn’t find any… Nobody has been able to find any; we sent the FBI, we sent the military.”  Former New York Senator Alfonse D’Amato agreed, “MeK has been the sworn enemy of the corrupt Mullahs who are there now.  Let’s make them our friend… Let’s bring down terrorism.”

Former House Speaker Dennis Hastert said the focus should be to make sure that MeK is de-listed. “If that happens, it takes away the issue of Ashraf.  It takes away the issue of Camp Liberty and gives people the opportunity to be repatriated to a country of their choice.”  As to the impact of the voice of Congress so far, Mr. Hastert said, “I think it puts the State Department in a tenuous situation in the reticence that they’ve had in not de-listing the MeK. If the State Department doesn’t do its job, Congress can withhold part of the funding for the State Department.”

“What is not difficult,” former Colorado Governor Bill Ritter, said “is this question of de-listing MeK… From a justice perspective, it would appear to be the only thing that we could do.”  Gov. Ritter added, “After watching the promises made in 2003 to the residents of Camp Ashraf, not just by the United States Government and the United Nations, but by the international community, in many respects those have been really unilaterally broken.” “This notion of transferring from Ashraf to Liberty and that it would be in a sense a transition, for the American people a transition from one place to a worse place on your way to a better place is not a just transition,” he added.

Former Coalition Forces Commander in Afghanistan, Gen. Dan McNeill, said, “A nuclear weapons capable Iran with its present government would be a traumatically destabilizing factor for not just the Gulf but for the greater region. Where does it stop?” General McNeill added, “I do advocate replacing such a repressive government, by plebiscite and popular demand, it would far better.  It would also set an example for others in the region.”

[Another speaker at the conference, Ambassador Marc Ginsberg, said] “When I talk to the State Department, they say, oh, these are the MeK, as if somehow or other they’re terrorists.  Well, prove it.  The court compelled you to prove it and I sat in that court hearing room.  And I didn’t hear anything.  Where is the proof?  I heard nothing from my friends in the [State] Department. I keep asking the Treasury Department, where is the proof?  I get no answer from the Treasury Department.  I asked the Justice Department, where is the proof that this is a terrorist organization?  I can’t even get the benefit of a reply,” noted former senior White House advisor Ambassador Ginsberg.